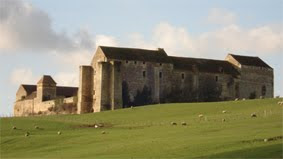 The nearest villages, not to speak about towns are located faraway in the West, in the Kingdom, and there’s no signs of villages in the Borderlands. But we know, from the Keep’s Fountain’s square entry that farmers live around, as they come for holidays to sell their products. As Gary expressed many times his views about typical fantasy setting as being filled with petty landowners and freeholders, as opposed to the common use of salves in Dave’s Blackmoor, or to serfdom which is not mentioned, I guess we should read farmers in that meaning: owners of a farm, paying a yearly rent to the castellan. These farms are scattered in the landscape, the Keep being the only real “village”, as refers it (p. 2).
To feed the more than 200 people living in the Keep, we could use several means of calculation, but I will use two very rough one. According to John Ross’ Medieval demography made easy, it means 2 1-miles hex are sufficient for this purpose, and a 40 people par 1-mile density seems to fit the region. So, let’s say around 80 farms surrounds the Keep in a one-mile line of sight from its towers. Another means of calculation would be to use a 10% ratio for “urban” population. Even if the Keep is not a town, this is a correct ratio for how many peasants are needed to feed non-peasants. If so, almost 1800 people could live in these farms, so more than 20 people dwells in each one. Note it fits John Ross supply value’s system, as 1500 people are needed to get 100% chances to get a smith and 2000 for a inn.
I first thought a farm could include an extended family (old people, couple, unmarried brothers and sisters, kids, etc.), but the Keep’s typical family is rather small: husband, wife and two kids, without any old people, which weaken that hypothesis. Demography is harsh: such numbers means that people marry late, children death is common and living old is not. So, I would suggest another model: farms are held by a farmer and its small family, surrounded by many daily workers and some wards, as the region is dangerous.
The Tavern’s (15) list of meals is an interesting source for local productions. You can’t find anything such as tea or coffee, but local people use bark tea as a warm drink, a very local custom. Wine is obviously imported from the West, as two tuns of wine are available in the common warehouse (5). But ale and beer could be local, which suggest than barley and hops are produced around the castle. Cool and contrasted climate suggest wheat as a prime cereal, so I suspects farmers practice shift of crops: one year with wheat, one year with barley and one year with legumes, most probably carrots and cabbages. These are the one you can expect in the Tavern’s soup or stew. Fruits could be apples, the most common, and seconded by pears. Raspberries and cherries are also very common in farmer’s personal orchards.
Honey mead may be from local bees, but its price two times higher than wine let suspects it could be either rare or imported from the West. Various quotes about meat are not so useful, as stew and roasted joint could be from any animal, while roasted fowl could mean almost any bird. My suggestion is that the most common fowl is , while the most common meat is hog. Quote of a hard cheese (in the ogre cavern!) and the fact that cheese is sold by wedges at the Tavern strongly suggest it is a cow’s milk cheese, probably a variety of Cheddar. So cows are probably raised in the lands surrounding the Keep, but for milk purpose rather than meat. It seems no textile is produced in the Borderlands, as clothes are also listed as products for merchants in the warehouse. So, sheep are unlikely to be raised there.
So, the common Borderlands’ farm is probably like a little keep, as the keep is like a little village: a yard for the Farmer’s private house and another for his workers, with a common room, a barn, the pig-house and building for cows and turkeys, all being surrounded by stone walls to protect against raiders.
Posted by Nicolas Dessaux at 4:43 PM

Very interesting. I like where this is going. There's one problem though. Unless someone is growing cane sugar (and I doubt it in that climate) large quantities of honey are going to produce beer and meed. he sugar is the honey is what is fermenting into alcohol. No sugar=no fermentation. What would be common in your setting is hard apple sider, however. Perry cider is even easier to make because of the natural yeast stains that grow on pears.

An alternative to honey I guess could be to use the sugar (and yeast) from the pears and apples. Using 20 lbs of crushed apples should be able to yield (with 4 oz of hops and or 2lbs of barely) 5 gallons of bear.

@Ian: You're right, my evidence about honey's price is rather light,as honey is an expensive good due to its production's conditions. Spring seems nice and presence of flowery trees, and probably plains filled of flowers during teh spring, suggest vbees could be local as well. It solves the problem.

Now, I'm studying carefully the keep's archaelogy. After all, it's supposed to be my specialty.

As someone who has lived in Northern Ontario and traveled in British Columbia, I think you missed several obvious berries: Blackberries, blueberries, and some others which could handle the climate (gooseberries, saskatoon berries, etc). There could be several varieties of apples quite easily. Blueberries particularly thrive in scrublands that are rocky - they need little depth of soil. One place you get fantastic blueberries in Northern Ontario (and likely in BC) is under high-voltage towers. Why? Clearing the trees gives lots of sunlight and allowing only scrub to grow gives them a good niche to exist. Alongside the roads in the area or in hilly scrub they may thrive.

I can see your argument about sheep, though they could have been a good source of cheese. So could something like buffalo but the terrain doesn't seem conducive, even if the climate is.

On the sugar front, you've missed another natural choice: The Sugar Maple and the production of maple syrup. It's not harmful to the tree, if you have enough trees you and +5-15C days and 0 to -10C nights in the fall (and I think in the spring) you can harvest sap readily.

Less appealingly, if they are using bark for tea, they may also have gotten the historically common (in Canada) idea to use bark for beer. Pine beer was an important item for British Forces here as it contained key nutrients even though the taste was only 'bearable'.

Some of the trees could also be birch. That opens up some uses for the birchbark - for canoes or for writing material.

Where do they get leather, iron, and steel, I wonder?

And here's another foodstuff and food chain geography you haven't mentioned: How do the various humanoids sustain themselves? One imagines Ogres, Bugbears, etc. eat a fair bit and the fecundity of goblins is fearsome so they must need to eat a fair bit collectively. How do the denizens of the Caves support themselves? If it is all by raiding, raids on local farming must be very successful to get away with that much stuff (they likely try not to kill the farmers or steal every last thing, so as to keep them farming.... for future raids).

That also might affect your numbers for how many farms are needed to sustain the Keep. If raids routinely do away with 10-25% of your agricultural output, not even counting having an overcapacity to deal with very rough weather (Canada's was typically far less forgiving than most of south or central Europe or England) which you ought to have, then you need to adjust your number of farms.

So perhaps they need 120 or 160 farms. That many farms, in a feudal structure, would imply some knights, manors, and some local militia, as all would not be managed (at least in an English model) by the Castellan.