Congregations of the Borderlands 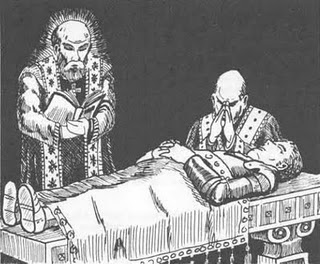 « Groups sent on a mission will be blessed and given up to 100 g.p. each for any needed supplies. », states, once again, Keep in the Borderlands. I was a bit puzzled by that blessing, and searched a few more explanations. The first one was technical: even if we adopt the « small scale » on the map, the 6 turn duration of the Bless spell should last before they arrive in the caves.
So, I read once again the spell description in OD&D (which was the rule set Gary had in mind when writing KOTB), Holmes (for which the module was officially released) and Moldvay (for which the module was adapted later). The text is almost the same, and makes sense: the spell should be cast before the battle, but will really be active once the fight begins. So, nothings prevent to cast a Bless spell long time before it could be useful. The only « technical » problem is any fight, even a minor one, will starts the spell effect and the six turn duration…
Anyway, the real question is not technical, but once again, anthropological. Why are the groups be sent on missions blessed? For sure, this provides a help in the first battle, which can’t be bad. But can this be the only reason? I suspect at least another one, which is embedded into the struggle between Law and Chaos. Law, as I already stated, seems obsessed by the idea of purity, and considers contact with Death and Chaos as impure. So, a Bless protects the groups from the impurity of Chaos.
Maybe I am wrong on that hypothesis, but searching for more clues, I was puzzled by another detail I didn’t noticed earlier about the Borderlands religion: « He [the curate] will only use the cure on a member of his congregation, such as an officer of the Guard or a shopkeeper. » So some spells could be reserved to congregation members and some are not. The reason should be discussed in detail, but the main fact is such: there is something called a congregation, and some people, including shopkeepers, could be members.
Congregation is a broad word, which could apply to an autonomous Church (in a protestant meaning), or a group of secular people practicing their faith in common, under the leadership of monks or priests (in a catholic meaning). Both meanings seems possible in the context, but it means the congregation is, apparently, more restrictive than alignment.
In the first sense, it would mean the Law itself is divided between several churches. Why not, after all? If there’s a dogmatic interpretation of the Law, it’s rather probable there are several dissents, or at least, coexisting interpretations… The fact the Priest tries to convert people to his (fake) faith by discussing theology provides a good base for this: it means several theological visions of the Law may coexist. I can easily imagine Borderlands people as highly religious dissenters, living faraway from the corruption of town and cities, and viewing their faith as a citadel of the Law protecting the world from Chaos.
In the second sense, Law church would have groups of secular people, praying altogether, organized around a curate or another religious figure. Catholic Church provides many examples of such “Third Orders”. The formulation Gary chose provides a good base for this: it seems that not every people in the Keep are a member of the congregation, even if all of them appear implicitly to be lawful.
Both explanations could apply altogether easily. The curate’s acolytes seem to consider the Priest “very highly”. They consider him as a member of the same faith, even if the curate himself is secretly defiant about him. I’m inclined to think the Law is not a so-much organized church. Many theological interpretations and congregations do exist, sharing the same basic pillars of the faith, but opposing on many other aspects. This diversity affects even an isolated and faraway place like the Keep, so just imagine how it could look in town and cities?
Posted by Nicolas Dessaux at 3:37 PM

The organization, focusing on rolex replica uk with regard to both women and men. Rolex might assure the actual specialized, visual as well as practical features, combined with the replica watches as well as after-sales support. Through 1947 onwards, annually following the recognized release associated with Tudor, the actual protect progressively vanished in the logo design, henceforth composed of just the hublot replica sale title and also the flower. Within 1948, the very first ads focused on fake rolex sale had been released. The actual manufacturer had been obviously related to Rolex, each within the textual content as well as within the logo design, as the duplicate stressed the actual appearance, chronometric accuracy, as well as waterproofness associated with rolex replica uk. This really is just about all really fascinating for all those fascinated with the actual histories associated with view manufacturers, however Wilsdorf's causes of creating another manufacturer together with replica watches sale tend to be exactly what genuinely issue as well as exactly what impact the way the 2 manufacturers are situated these days, a few seventy many years later on.

I used to schedule online sessions only to have them crash