A frightful hobgoblin is stalking Europe 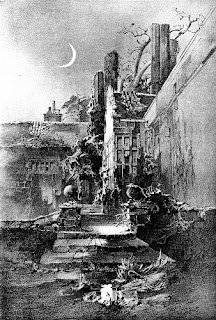 I have ideas and plans to continue the Borderlands analysis, and expand it to others 'B' modules. But, I currently lacks the time I need to do it quietly, because of my involvement in the preparative of strike. As you know, is the country of strikes. It could be discussed as a reality, as the working-class movement is impressive in its own way, but French' strikes turned to be like a cliché. So, as tomorrow will be a national day of strike, I want to speak of something D&D and communism have in common: Hobgoblins.
Few people would link hobgoblins to communism. Let me explain. The first English translation of Karl Marx's famous Communist Manifesto, published in the chartist paper The Red Republican, by Miss Helen Macfarlane, started by this phrase: "A frightful hobgoblin is stalking ". Later, the frightful hobgoblin was replaced by a spectre, closer to the German version. But the word Hobgoblin is still a part of the Communist heritage, and The Hobgoblin is today the title of the paper published by The International Marxist-Humanist Organization.
I wonder why Helen Macfarlane choose Hobgoblin as a translation. It seems, when she write it in the middle of the 19th century, it was an accurate word for a ghost, but later translators apparently didn't find it self-evident, as they replaced it. The German word Gespenst, choose by Marx in the original version, probably had something to do with Hegel's concept of Gheist, which is both a mind, a spirit and a ghost. This is an interesting clue, as the word Hobgoblin is not so common: Helen McFarlane's hobgoblin is more or less an undead. Trolls, in Norse sagas, are undead as well, as are most dark creatures. The border between living creatures and undead is not so clear in Norse and German mythology than in modern role-playing games. As I'v been a long time Vampire player, I can't avoid to note that Miss Macfarlane identity is barely known and nobody knows where and when she died. But that's another matter...
Studying the genealogy of the gnoll to write the Gnoll's article for Wikipedia, I noted that gnolls and hobgoblins have strong links, and both of them are also linked with undead. In the lbb's, gnolls and hogbolins are closely associated, several times, and the thoul - even if it could first have been a typo - is noted between gnoll and ghouls. Then in Molday's D&D, Thoul is described like being between troll, ghoul and hobgoblin, often mistaken with the later. Last, Yeenoghu as links with gnolls and ghouls (interestingly, arabian tales describes ghouls as being able to change to hyenas). So, all these creatures are linked, I should say chained, with ghouls, an undead creature.
Chaos in OD&D is strongly tied to death and darkness, and hobgoblins are part of Chaos. I don't know what had in mind, and how his thoughts evolved on that point, but he's well known for his love for German mythology. Hobgoblins are closer to their mythological sources and far much more impressive when they're some mysterious creatures bewteen life and unlife, than just a tribe among others. So, let's Frightful Hobgoblins stalks your campaigns!
Posted by Nicolas Dessaux at 1:53 AM

Good post. I think there has been a demistification of monsters in D&D, that leads them to not having the "fright" factor that underlies there origins. I'm not sure there's a way to capture any of that, but it might be worth the effort.

FROM DAVID BLACK>
In my book, 'Helen Macfarlane,A Feminist, Revolutionary Journalist and Philosopher in Mid-19th Century England' (Lexington 2004) I compare two translations of the opening sentence of the Communist Manifesto ("Ein Gespenst geht um in Europa - des Gespenst des Kommunismus"). In the Engels and Mooore translation of 1888 this is rendered as "A spectre is haunting Europe. The spectre of Communism." Helen Macfarlane's translation of the opening sentence is the more exotic:
"A frightful hobgoblin stalks throughout Europe. We are haunted by a ghost. The ghost of Communism."
"Macfarlane tries to give 'Ein Gespenst' a double meaning. It is not just the ghostly apparition that haunts the castles of Shakespeare's Macbeth and Hamlet, foretelling doom and retribution for the incumbents. It is also the scary sprite that country folks tell their children lurks in the woods, in order to discourage them from wandering off on their own. "

More recently in a commentary on my book in ‘Yoshimoto Taka’aki,
Communal Illusion, and the Japanese New Left’ Manuel Yang writes:

"Indeed hobgoblins, which belong to the historical imaginary of the
Scottish fairyland, are creatures that inhabit the daily world of
peasant communing. This world had ready access to demotic curses, often expressed in such fairytales and premised on customary laws that were intended to protect traditional popular rights from the cupidity of self-interest, the central tenet of bourgeois rationality. Whose bloody acts of exorcism took the form of enclosures, privatization,
imperialism."

Yang quotes the following:
“Fairies were firmly connected to the landscape and deeply rooted in
the soil. The importance of respecting the land which they frequented was widely recognized. It was bad luck to interfere with, or try to remove, trees, bushes, stones, ancient buildings or anything else believed to have fairy associations. Misfortune, illness, or even death might result from tampering with fairy property.”
[Henderson and Cowan, Scottish Fairy Belief. 2001]

'Marx explicitly stated at the end of the Manifesto that the ommunist
movements “bring to the fore, as the leading question in each, the
property question, no matter its degree of development at the time,” and the struggle for the ‘fairy property’ of the commons is nothing if not such a question. If ‘spectre’ is a more philosophically mediated, reified form, divorced from the earthly spirits that directly haunt the
peasant imagination, its Hegelian origin nonetheless lay in the
commons, as Marx recognized with genuine surprise twenty years after composing the anifesto: “But what would old Hegel say in the next world if he heard that the general, [Allgemaine], in German and Norse means but the common land [Gemeinland], and the particular, [Sundre, Besondere], nothing but the separate property divided off from the common land?” '
[Marx, Pre-capitalist Economic Formations 142]

Hello mate! (Or should that be 'comrade'? I must say I ain't never heard of a D&D-influenced communist before - outside of China Mieville that is! Which party do you belong to? I've had to settle for the broad church of Labour because I know the commies an trots an socialist workers won't take you unless you profess absolute Dawkins-style "rationalism"; and that won't do for me; and I'm not prepared to lie.

This site makes a refreshing change! Bet u don't believe in the "spirit world" though. Be interesting to see how right my supposition is..)

Yeah - this idea of trolls being undead. I must tell you I know more than a thing or two abt Norse mythology and Scandinavian folklore too: and trolls ain't ghosts or vampires: aka "undead". Now *draugar* are; they're mentioned in the sagas. You'd be right in thinking that the fairy folk are sometimes identified with dead folks (or the souls of dead unbaptized children) in British and also Germanic folklore: see Grimms Sagen. This is probably bcos people didn't know

..what they were, or in Christian times, where such non-biblical things would come from. Personally I think they're a race separate to humans, like most things in mythology. They inhabit (mostly) other, intersecting dimensions.

As for a gnoll: never heard of em; now I've got to look the bloody things up! D&D players specialise in the most obscure critters! Why can't you all want to play centaurs, or something?!

Yeah so like I said: some people associated fairies with death - or even hell! (Tam Lin, anyone?)

But in Nordic mythology they're divided into licht- and svart-alfar: light and dark elves. This has no bearing on the colour of their skin.

Hobgoblins are a Scottish term/concept: hence their use, no doubt, by Miss McFarlane? (Also see George McDonald's c19th Goblin books.)

Yeah the Scots had loads of goblin folktales: Billy wotsisname, Bragg, was it!?! Billy something anyway, I'm not a Scot.

But this looks like my kind of site! I shall subscribe! Unite, and unite, and let us all unite!!

PS & londonhobgoblin's book about Helen McFarlane sounds fascinating - should've provided us a link right to it!!

I'm a member of Worker-comunist Initiative (http://www.communisme-ouvrier.info/), which is inspired by the iranian marxist Mansoor Hekmat (http://www.m-hekmat.com/). So, yes, i'm a pure style materialist. It don't mean I underestimate the romantic background of Marx and the obvious links of early communism with 18th and 19th mystic thoughts.